Skip to content
Solène Debiès > Lifestyle > Posters: an illustrated campaign for the city of Nantes 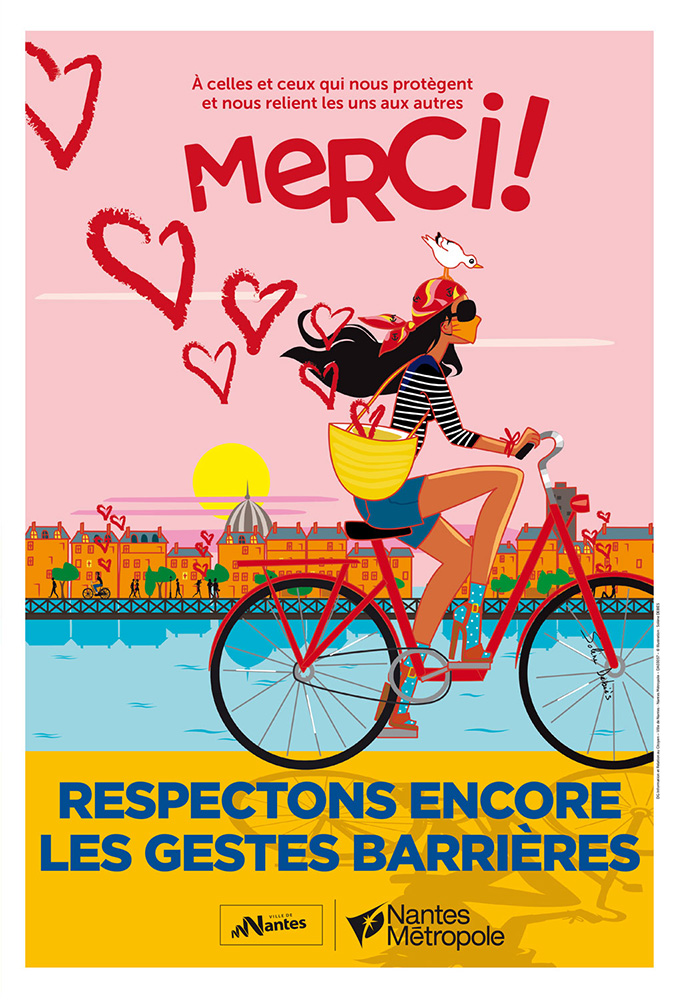 Creating 2 posters for the “Thank you! » campaign of Nantes Metropolis

The city of Nantes contacted me a few days after my return from Vietnam to ask me if I wanted to participate in the creation of illustrated posters for a thank you campaign. This campaign, drawn by 4 illustrators from Nantes, is intended for all professionals and staff who were active during lockdown.

The mayor's communications department only left me a few days to present them with my first drawings. It was just before the end of lockdown, and the idea was to thank those who had been on the front line during this unprecedented period (nurses and nursing staff, cleaners, police, firefighters, cashiers, traders ...), to encourage people in Nantes to continue to respect public health and social measures, and finally to give back some color and motivation to the city that had to go to sleep for a few months!

The first illustrated poster: by bike on the banks of the Loire river

My first idea was to highlight the newfound freedom to be able to get around the city by bicycle. Spring had just covered the metropolis with its sweet colorful mantle of flowers and plants, and spring scents had taken possession of the urban air. The rarity of cars in this strange period only enhanced the attractiveness of exploring the city by bike!

So I drew a pretty young lady on a beautiful red bike ; leaving me with Nantes to draw in the background. I chose the edges of the Loire, and a point of view which could be on Nantes island, near the « machines de l’île » and the elephant, from where you can see the « les quais de la Fosse » on the other side of the river.

Our girl from Nantes set off on her bike. Initially, carefree or badly informed, she bulldozed ahead forgetting her mask ... This illustrated campaign was, among other things, used to encourage Nantes residents to continue to respect health and social measures, including wearing a mask… A small request from the communications department of the town hall, and the mask of our pretty cyclist was quickly sketched in one pencil stroke, then colored in yellow to give it all the freshness and optimism that this spring outing was meant to inspire.

The second poster: the people of Nantes say thank you!

After finishing the first illustration, I thought that a visual representing more explicitly the locals thanking and wearing masks could give a more readable and understandable message.

So I drew 3 characters close-up (2 women and a man). They’re shown masked and raising their thumbs evoking a frank and sincere “Thank you! " gesture.

Historically masks are not a fashion accessory in French wardrobes… Yet I knew it was possible to make it into a strong graphic element and give it all the attractiveness necessary for the poster:

You can be stylish while wearing a mask!

So I did a search on a palette of colors and patterns, which evoked Nantes (the yellow crane, the LU tower, the elephant) and I tried to keep the whole fairly simple, with vibrant colors. I had originally drawn 3 characters in the first poster : we chose to remove 1 so that the advice on « social distancing » from this strange pandemic, was also respected in the posters which were to be displayed in all the districts of the city… 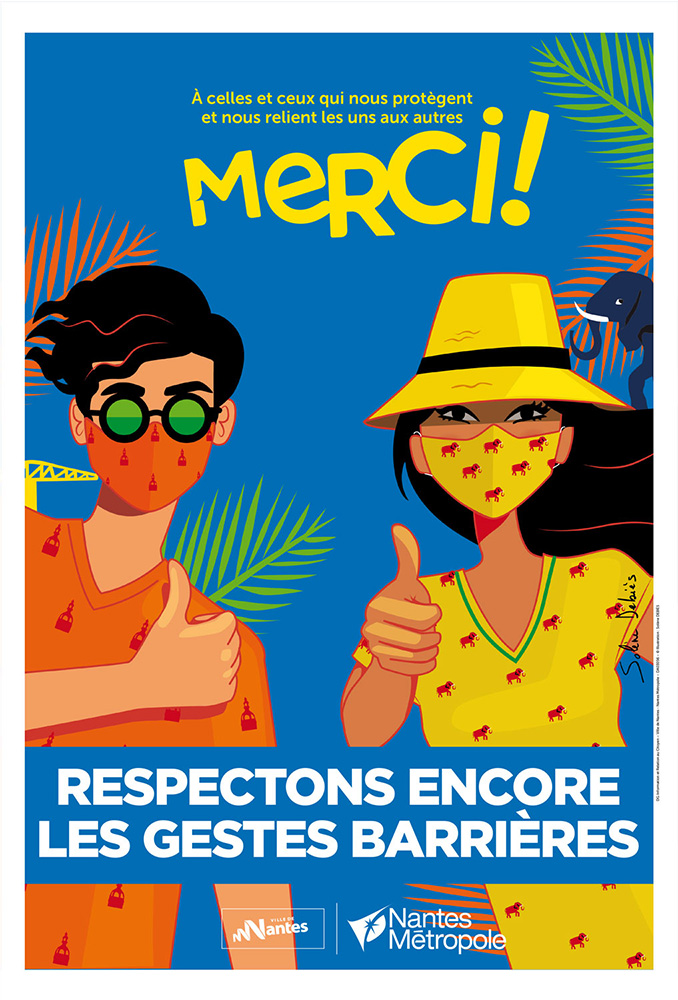 Finally, the town hall chose to distribute both posters ! It’s quite rare that my creations are broadcasted in Nantes, and I had rarely seen them broadcasted on 4x3 urban displays before ! I took the opportunity to take some pictures of my work :